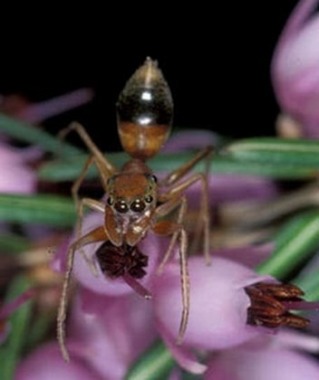 The use of deceptive signals is not uncommon in animals, although we tend to hear much more about honest signalling. The truth is that animals will use deceptive signals if they can get away with it- and often they can.  One of the more common types of deceptive signal is Batesian mimicry, where palatable individuals of a species avoid predation by using their resemblance to an unpalatable or dangerous model species for deceiving potential predators. The most numerous Batesian mimics are Myrmarachne, of which we know have an in-depth understanding.

What with great eyesight, and ability to identify rivals, mates and prey from as far as 30 body lengths away, you’d think being a jumping spider (family Salticidae) was kudos enough, but the 200 or more species in the largest salticid genus (Myrmarachne) add dramatically more to the salticid portfolio by being remarkably similar to ants in appearance. One of the interesting things we have discovered is that, for Myrmarachne, looking like ants isn’t all fun and games. Although resembling ants seems to function in general for Myrmarachne as Batesian mimicry, this gets complicated because, in order to be a convincing mimic, some Myrmarachne species go to considerable lengths to live in close vicinity of their models. That’s a complication because the company of ants can be dangerous, but accurate mimics have evolved special adaptations that allow them to survive in the vicinity of their models. One of these adaptations seems to be for these traditionally solitary spiders to form groups.

There are other complications, including the fact that many predators specialise on eating ants, and confuse Myrmarachne with ants. Although deceiving predators that eat ants sounds like a bad idea, Myrmarachne has  found ways to ameliorate mimicry that goes wrong. When an individual of Myrmarachne receives the unwanted attentions of ant-eating salticids, it actively defends itself by revealing its true identity. The mimic switches off its ant-like demeanour and acts like a conventional salticid by raising its legs and displaying at the ant-eating salticid in much the same way as salticids generally threaten each other.

Now the plot thickens. Besides their ant mimicry, there is something else for which the genus Myrmarachne is renowned. It is as if the males of these salticids have been badly mangled by sexual selection. Myrmarachne males have enormously elongated chelicerae and, at first glance, these would seem to render them relatively unlike ants in appearance. Maybe this is a cost of sexual selection, but this cost seems to be ameliorated by the Myrmarachne males retaining Batesian mimicry by resembling something more than an ant. The large chelicerae resemble an ant carrying an object in its mandibles. We have called this ‘compound mimicry’, as the model for Myrmarachne males seems to be a compound model, an ant and something being carried by the ant.