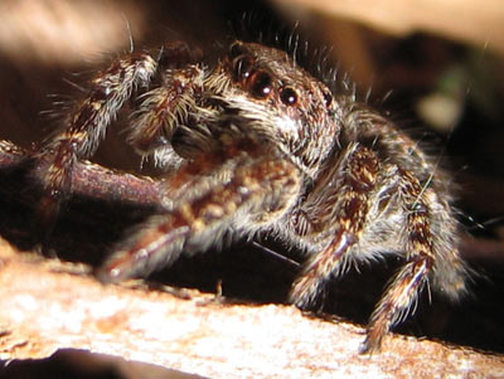 The challenge of perceiving the visual world is an ancient design problem. There are three distinct functional requirements for any effective system: animals must detect objects in a large area of the environment, they must achieve sufficient resolution to identify them, and they must reduce the visual information to a level that matches the capacity of their brain to handle it.

Familiar vertebrate eyes like our own are but one solution. Remarkably, at least 10 distinct designs have evolved. These can be broadly grouped into two classes, each accommodating the competing tasks of high-resolution vision and motion detection. Some animals have large eyes that address both functional requirements in a single structure; this obliges them to allocate a relatively large proportion of their neural resources to the massive processing load that such a system generates. The alternative is to adopt a design that segregates the tasks of motion and form processing into separate, dedicated, systems. The resulting output makes much more modest computational demands, suitable for animals with small brains.

The seemingly impossible feat of achieving high acuity and large field of view with only modest computational power has been achieved in only one group. Jumping spiders have evolved a unique ‘modular’ design. Four or six secondary eyes function as motion detectors, functionally analogous to peripheral vision in vertebrates. These combine to produce a field of view of almost 360 degrees. When something interesting is detected, the spider spins around to bring its two large forward-facing primary eyes (analogous to a fovea) to bear. These animals have a body length between 2-12 mm and brain only half the size of a honeybee’s, yet their sophisticated visual system attains a visual acuity that is almost an order of magnitude superior to their closest insect rivals and approaches that of primates. This is a stunning demonstration of evolutionary design and miniaturisation that, were it understood, would make our best robotics engineers weep.
Spiders have four pairs of simple (camera) eyes, arranged in different configurations depending on their phylogeny. While web-building spiders possess relatively poor vision and largely rely on vibrations on webs to sense and catch prey, the most numerous family of spiders, the jumping spiders (Salticidae), have evolved a highly acute modular visual system which plays a central role in their behaviour.

Vertebrates can afford to combine different specialisations in a single pair of large eyes, the small salticids divide the tasks of high resolution analysis of spatial detail, motion detection and colour perception over different pairs of eyes. Their large, forward-facing, principal eyes achieve spatial acuity (up to 1/25 of a degree) that is unmatched in animals of comparable size. However, this acuity is bought at the expense of wide-field coverage, which is instead supplied by 2 or 3 pairs of anatomically different secondary eyes. These eyes are primarily motion detectors, but the extent of this specialisation has been a subject of debate. We investigated the forward-facing pair of secondary eyes, the anterior lateral (AL) eyes.

The AL eyes are especially interesting as they, too, have a zone of high acuity. Additionally, they have a wide field of view with a large region of binocular overlap that encompasses the field of view of the principal eyes. Due to the combined fields of view of the secondary eyes, salticids can perceive stimuli spanning up to 360 degrees, and will carry out characteristic orientation turns to fixate stimuli in a frontal zone of high acuity. In our work, we make use of this ‘optomotor’ reflex to test in detail how the AL eyes detect motion and what behaviour they mediate.

We have described stimuli that elicit maximum responses from females and males, and have demonstrated that hunger state increases the propensity to orient to stimuli. Additionally, we have shown that the AL eyes are capable of mediating predatory attacks and have described in detail the tracking body movements that jumping spiders carry out to keep moving stimuli centred in their frontal field of view. Additionally, we have investigated the limits of the movement that the AL eyes are able perceive, showing that they can detect stimulus displacements that are an order of magnitude smaller than photoreceptor spacing would suggest, which has implications for the study of other visual systems. Furthermore, intracellular electrophysiology of the temporal response characteristics of secondary eye photoreceptors show that these are unusually fast for a terrestrial arthropod. 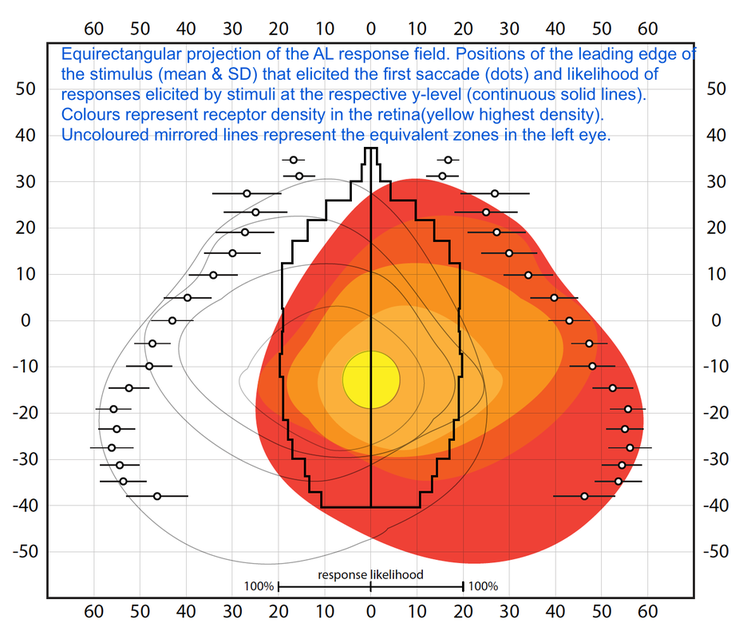 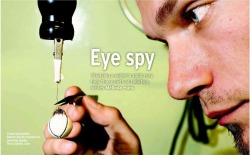